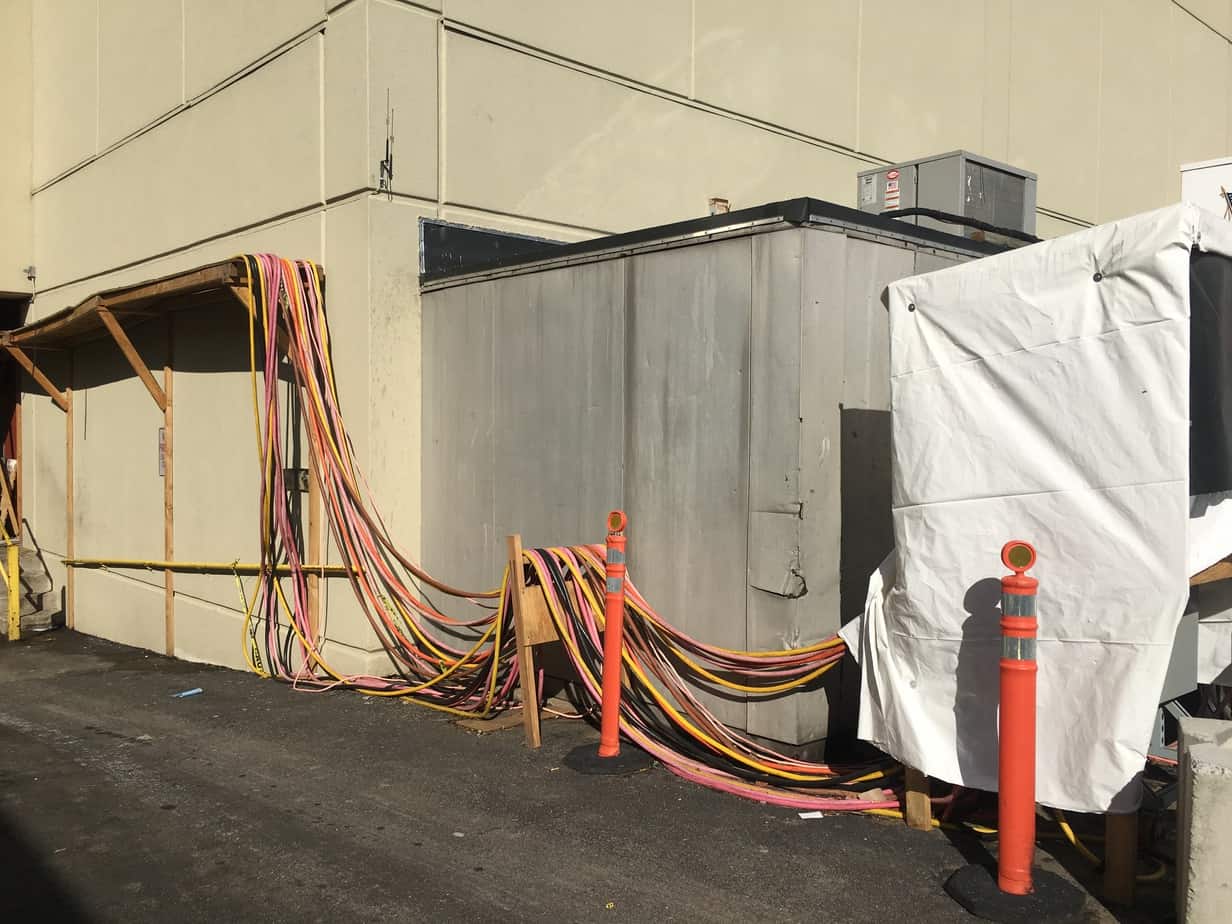 So, we’ve come back to the site at the Hilton Hotel in Hasbrouck Heights, New Jersey that had the catastrophic failure in their 4,000 amps service on September 28th. As of October 3rd, we’ve had them powered up now with these generators here and another one I’m going to show you in a minute. So what we’ve done is this is a 1000 kW diesel generator that’s been running 24 hours a day, seven days a week except for servicing times that we had to come in and service the engine.

We have two fuel lines taking fuel from the 2000 gallon tank and we’ve also plumbed the other rental generator that’s behind this one to that same 2000 gallon tank. So now we’re able to pump fuel and keep both these engines running around the clock no matter what goes on. We’ve got tons of fuel on board. I’m going to show you the cables that we ran up to the sixth floor of the hotel.

These cables go all the way up to the sixth floor and that’s the output from this generator to feed the resident rooms and the guest rooms in the hotel for the power. I’ll explain to you how we did the house power a little bit later. So I’m going to take you around to the other side and show you some switches and other equipment we set up so that we could give this hotel uninterrupted power from reliable diesel generators.

We have a set of four rod cam lock cables that we ran up to the sixth floor. So, we had to run four runs per phase times three phases, four for the neutral and one for the ground. That’s a fair amount of cable that’s been ported out that window and down six floors to get to the 1000 kW generator that is producing 480 volt three phase power to feed the guests rooms in the hotel.

We have a 1600 amp service entrance rated automatic transfer switch and what we’ve done is cabled this switch with all of this cam lock so that it’s powered from this generator. If for some reason this generator shuts down, it’ll automatically start the second 1000 kW generator and this transfer switch will electrically switch the power so that the guest rooms will only be in the dark for about 15 seconds in the event that this engine shuts down for any reason.

You can clog a fuel filter, there are all kinds of things that could go wrong. You can’t expect a diesel engine to run for four months non-stop and not having an issue. That’s why we put all of this equipment in because of the demands of this customer. Behind this is an 800 amp circuit breaker, which we’ve tapped the power off of, this 1000 kW generator, which feeds another transfer switch, that is powering the house power. What we have here is our 2000 gallon dual wall fuel tank inside our roll-off box and all of the hoses that are up on top of this. Not only are we able to feed fuel to the 1000 kW generator, that’s our prime power we also hooked up the backup generator to this. So fuel is never an issue. We’re able to run these engines 24/7 and not run out of fuel.

This is another generator, a 425 kW generator which is feeding the house power. It feeds all the lower level power demands, the kitchen and lobby level with power. Underneath that white tarp box that we built is another automatic transfer switch. In the event that this generator fails, it’ll automatically take the power from one of the other generators that are running.

In order not to have an interruption in power in the hotel we have an additional 500 gallon auxiliary fuel tank, which we can transfer fuel from that 500 gallon tank into the base of the trailer of this generator. This is how we keep these engines running prime power 24/7 and keep the hotel in reliable power so they can keep their guests safe and comfortable.

PSE&G told us it was going to take six to 12 months for them to be able to redesign a new service. We knew that it wasn’t in the best interest of our customers to stay on diesel generators for 12 months, so we installed, this 15,000 volt switch gear, and now we’re buying power from PSE&G at primary voltage versus secondary voltage 480, which is what it used to be.

The advantage to the customer is that they’re going to see a substantial reduction in their electric bills monthly, somewhere between 30 to 50% less because of the investment of this equipment that we installed.

You can see that this was most definitely the least expensive way for the hotel to go and the most economical solution for them to get back into power. What Academy Electrical Contractors has done is utilize this is 15,000 volt gear, so now the power comes in from the utility company at primary. That voltage then goes to this 1500 kVA oil filled step down transformer that takes that 13-2 and steps it down to 480 volt.

That 480 volts then goes to this switch gear. Incorporated in this switch gear is an automatic transfer switch for the future 1500 kW generator and the distribution breakers that brought multiple circuits inside the building.