For The Second Year In A Row Cummins Onan  Awards  Top Dealer Academy Electric The Award For Excellence In Sales, Installation And Service Of Standby Generators For The Northeast. 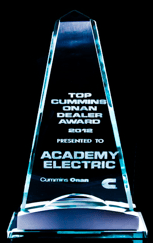 When it comes to service Dan O’Brian says “staying on top of the equipment and following through with the customer is the only way. Maintenance of the generator is key to having the unit perform when needed.” In a recent storm Academy Electric received over 25 calls from customers with generators with starting and running issues. “It’s not just repairing the generator, it’s following through and solving the other problems” added Dan. “Follow through is a main focus for customer success at Academy Electric”.

Dan O’Brien believes that “with the extreme weather events we’ve experienced in the Northeast in the recent years and our daily dependence on technology ie phones, computers, garage doors and gadgets that we have become reliant on, every home and business should be outfitted with a generator. The generator has become the must have home appliance of this century.”

Academy Electric uses Cummins Onan as it’s generator of choice and has done so since 1989. Cummins Onan builds the highest quality commercial mobile generator sets in the industry. Their extensive network makes it easier to get genuine Cummins Onan parts, quality service, and expert installation assistance when and where you need them.

Derek Thompson, Cummins Onan territory manager for Cummins Onan Powered Systems stated; “Academy Electric has been a major component from Cummins power system success in recent years they are an outstanding performer in the generator market and we look forward to many years of their partnership.”

Academy Electrical Contractors, Inc., is a full-service electrical contractor with their own fleet of trucks and full complement of equipment, specializing in generator sales, service, installations and rentals. Electrical contractors that are power generator experts. With an on site inventory of generators and the ability to provide back up power from 1,400-watt portable gasoline models all the way up to 2,500,000 watts of diesel generated power. Servicing NJ and NY for over 18 years.